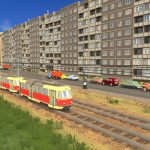 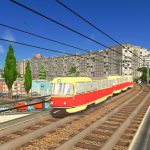 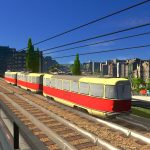 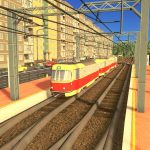 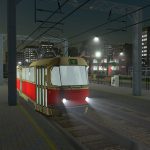 The most numerous tram car in history (except soviet KTM-5, but who cares?), Tatra T3 was built in Czechoslovenska capital, Praha, from 1962 to 1989 (later versions of this car were built in other factories till 1999) and served on the 1/4 of Earth – from Germany to North Korea, from Germany to Romania and Jugoslavia. In Russia it works in dozens of cities now. Also you can meet this beautyful tramcar in Ukraine, Slovakia and Czech Republic, its birthplace.

This is a three-car train version.

In game model serves as train car, so you need some additional mods to use it as a streetcar. Here is a list (thanks to Alex_by):

1. IPT by DontCryJustDie – to put this cars on your lines
2. Sharp Juction Angles by Thaok – to built streetlines and loops
3. MoreTrainTracks by simon.royer007 – to built crossings where they couldn’t be built
4. Tram stops by BL4CKST4LK3R_ – the place Your tram stops
5. AVO by SamsamTS – to avoid this car spawn on trans-continental lines. Also allows to chage speed ofthe vehicle.

This model is repainting on line color (route windows), but saves original livery. If you want I wikk make fully-repainting version later.

Also I’m going to make a video about classic trams and how to built a tram line, so check it out!