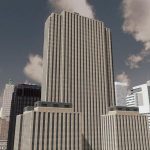 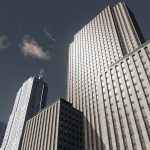 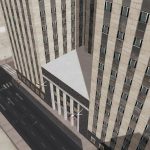 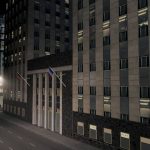 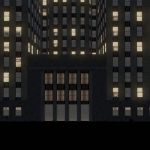 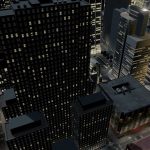 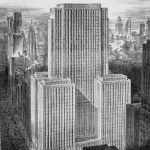 This art deco colossus is one of Chicago’s oldest and boldest. It stands 45 stories tall, on the site of the world’s very first skyscraper, the Home Life Insurance building in the heart of Chicago’s Loop. It went up in 1934 as the Field Building, and was the last major building before the Depression caused a two-decade development slump (which ended with One Prudential Plaza in 1955).

Chicago art deco towers are often shaped like “chairs”, as opposed to the “wedding cake” style of New York art deco. As such, this limestone hulk consists of a black marble base that gives way to four turrets at the corners enclosing the central tower. The two turrets at the rear are conjoined to form the “back” of the chair. Brass windowframes are recessed, cut into stiff ribbons to emphasize the building’s verticality.

Today it is host to Bank of America, AmTrust, and some other vampiric things. I’ve included at the base some self-illuminating bank logos, as well as a set of Chicago flag emblems in case this venerable old skyscraper gets homesick in whatever new town he ends up in.