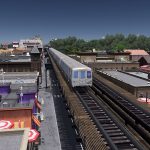 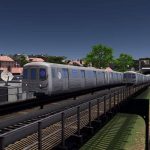 The next stop is Indecipherable Mumbling Avenue. Stand clear of the closing doors.

This aging, 6 car train is great for subway systems with wide curves and long straights. Taken from the NYC Subway’s B-division lines (The lettered trains), this train features a accurate, then-futuristic look, and enormous 75 foot car length with line-colored route-bullets on the front cars. It’s made up of a pair of 3-car sets, shrinking them slightly from the prototype to allow the trains to fit into C:S stations.

This train fills the archetype of the R68s as well, so don’t expect them from me, at least for now.

Check out my other NYC subway trains here:

To truly complete the NYC rapid transit look and feel, check out my SkyConnect, based off the JFK Airtrain: