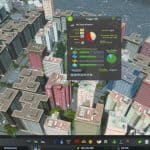 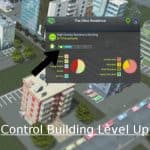 Unsubscribe the old mod before you get this one!

This mod enables you to control your city development by preventing buildings from upgrading to a certain level. Simple select a (growable) building of your choice and click on one of the level-up progressbars and the building won’t exceed over this selected lock-level. If you select a lower level than the actual level of the building it will be bulldozed after a while.

How is this different from the “Make Historical” checkbox of the game?

“Make Historical” is generally the better option because it allows buildings to level up without replacing them, which is important for the growth of your city.

This mod locks the wealth level of the buildings, that means “low-level” people will live in your homes. Another difference is that it allows you to mark a whole district as “historical”.

I’m recommending you to use the “Make Historical” option of the game.

Version 0.5.1: Updated for Industries
Version 0.5: Updated for Parklife
Version 0.4: Added district support.
* Click on the district to set a lock level for residential, commercial, industrial or office buildings.
* Now we distinguish between district lock level (red symbol) and individual building lock level (white as so far).
* After setting a district level, which applies to every building of this type in the district, you can still set a specific lock level for each individual building, this level has always a higher priority than the district one.
* That means also, that already existing building lock levels will not be overwritten when setting a district level.
* When removing the building lock level, the district lock level is assigned to the building (if this is set for this building type).
* Changed lock symbol from ‘#’ to ‘x’.
* See new video!
Version 0.3: Removed debug-infos
Version 0.2: There was a bug in the first version of this mod. Some parts of the code were not initialized correctly, so basically the mod was working in background, but the user interface wasn’t loaded.